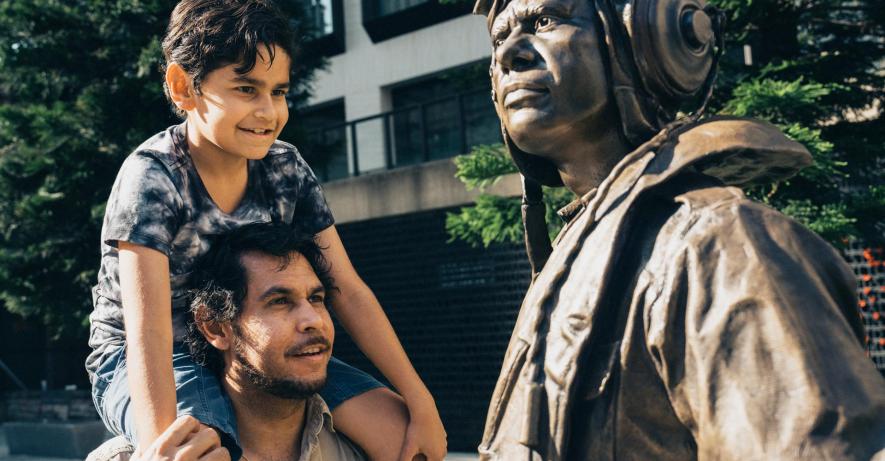 Discover the features and symbolism of the Anzac Square parklands.

Three paths enter Anzac Square from Elizabeth Street, each one dedicated to a branch of the Australian Armed Forces. These are arranged with the Army path in the centre, Air Force to the south east and Navy to the south.

Flanking these pathways and distributed throughout the park are several trees and plants. In addition to the shade they provide, these trees were planted to commemorate Queensland Light Horse units (bottle trees), service in the Middle East (palms), Gallipoli (rosemary) and peace (Bribie Island pines). Where the three paths conjoin there are two tiled pools, whose reflective nature symbolises tranquillity and new life. The parklands are surrounded by a wall of bronze lettering, which lists 2,075 towns and suburbs from which Queensland servicemen in WWI and II originated. 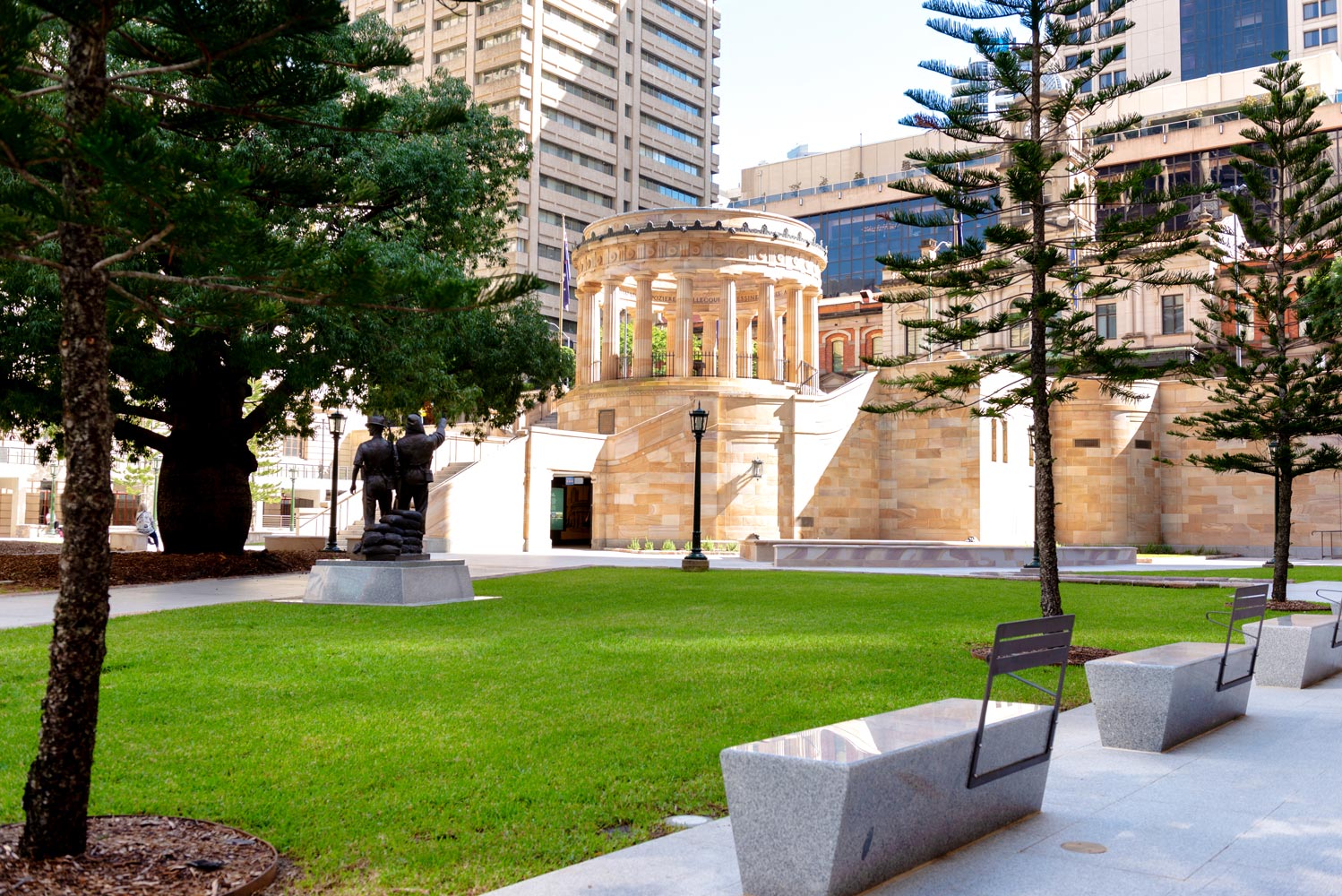 The most imposing element of Anzac Square is the Shrine of Remembrance, a cenotaph located on Ann Street atop a large sandstone wall which rises from the back of the parklands. The cenotaph and Ann Street entrance are accessed by two sets of stairs with steps numbering 19 and 18 respectively in a reference to the last year of WWI. The shrine itself is a combination of a Greek sacred temenos and circular tholos, supported by 18 Doric columns and sitting atop a three-tiered base of Queensland granite.

The shrine is adorned with decorations, including bronze wreaths (representing peace) and lion heads (representing bravery and the British Commonwealth).

Inside the Shrine, the Eternal Flame burns in a bronze urn as an everlasting reminder of those who died in their wartime service to Queensland.

The materials used in the construction of Anzac Square are significant for their ties to Queensland, most notably the heavy use of local sandstone. The inclusion of bronze throughout alludes to the metal’s traditional symbolism as a representation of grandeur, strength and nobility. 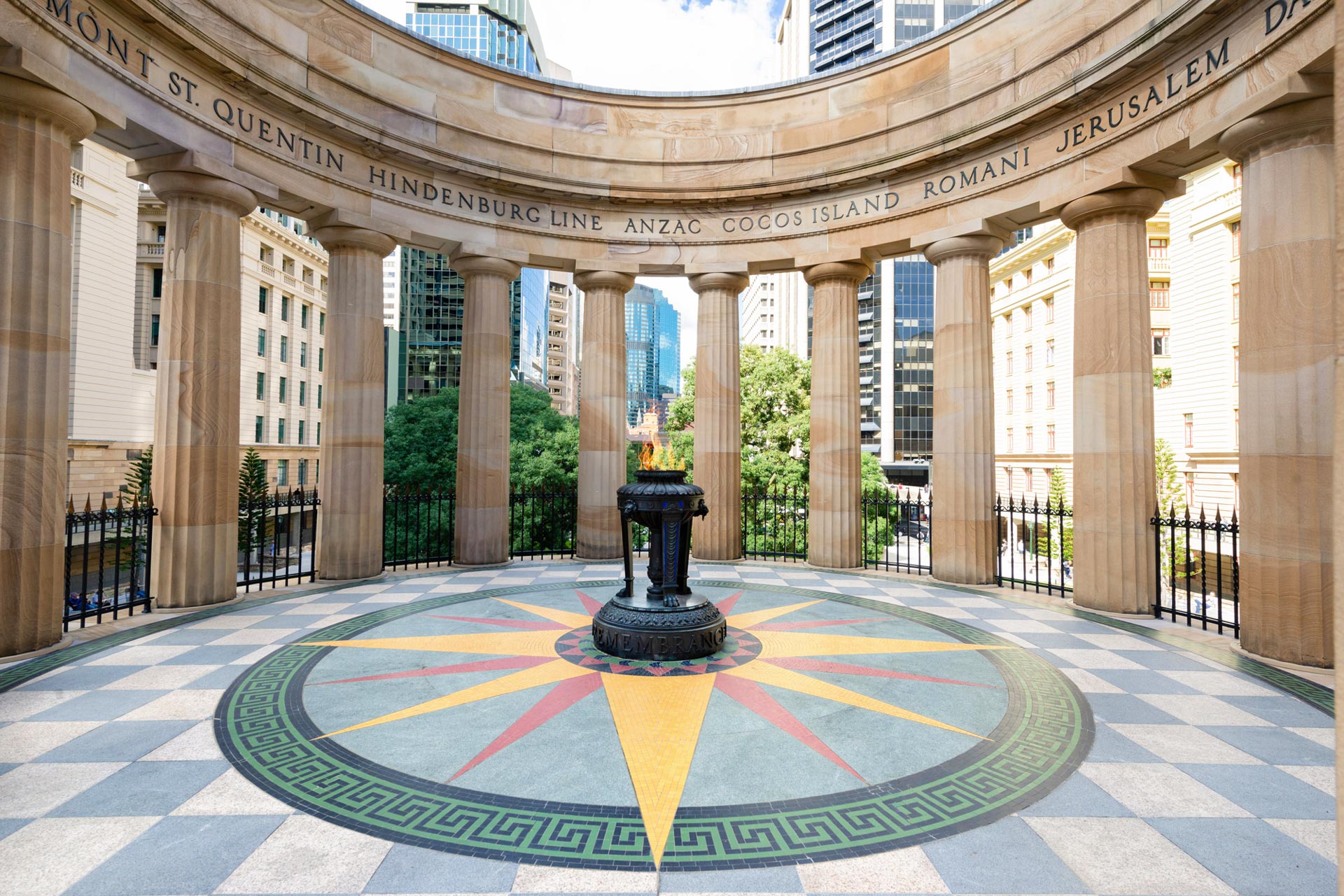 The first statue to be installed at Anzac Square was the South African (Boer) War Memorial. This memorial, known as "The Scout" features a mounted infantryman upon a sandstone plinth flanked by two bronze plaques listing the names of 89 Queenslanders who lost their lives in this conflict from 1899 to 1902.

The statue was sculpted by Mr J.L. Watts with the assistance of Mr J.A. Watts. Commissioned in 1912, the work was not completed until 1917 as the mould was sent to England to cast the bronze. It was unveiled in its original location on the corner of Edward and Turbot Streets on 16 December 1919. The Scout was then relocated to its present position at the Adelaide Street entrance to Anzac Square in 1939.

A service is held in May each year at this memorial to commemorate all who served in the South African (Boer) War. 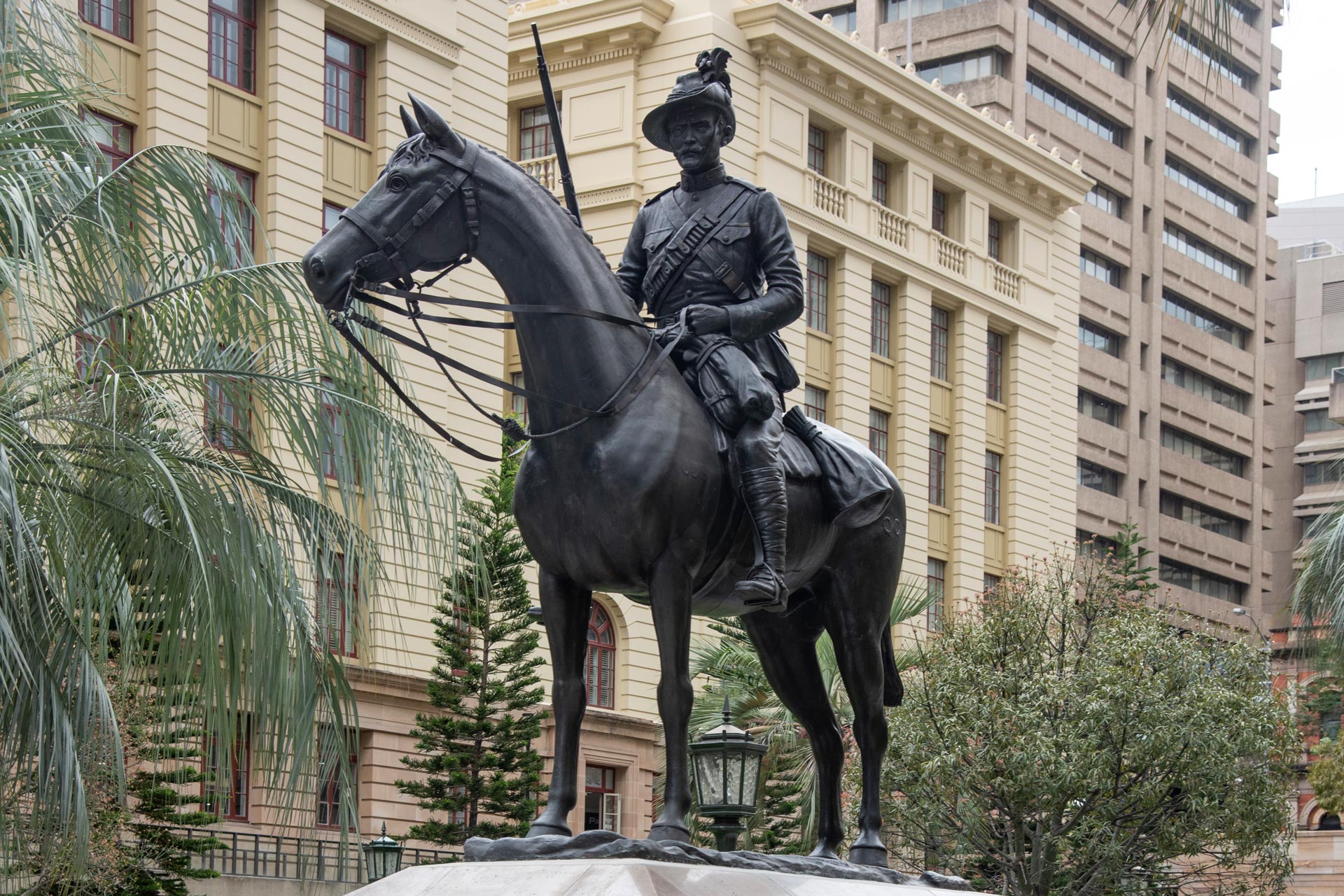 Unveiled on 29 August 1992 (the 50th anniversary of the Battle of Milne Bay), the South West Pacific Area (SWPA) statue is dedicated to those who fought in the theatre of war of the same name from 1941-1945. This included significant action in Papua New Guinea and Borneo, such as the Battle of Milne Bay, the Kokoda Track, Battles of Buna and Gona, Bougainville, and amphibious landings at Tarakan, Brunei Bay and Balikpapan. These campaigns involved fighting the Japanese in dense and treacherous jungle, sometimes with the assistance of local populations.

The statue depicts a wounded Australian soldier being guided back to a field hospital by a Papua New Guinean, affectionally known as a Fuzzy Wuzzy Angel due to their hair and the assistance they rendered Australian troops. Passing them is another Australian infantryman in jungle kit heading towards the front line.

The Memorial was sculpted by John Underwood and unveiled by Alderman Jim Soorley, Lord Mayor of Brisbane. 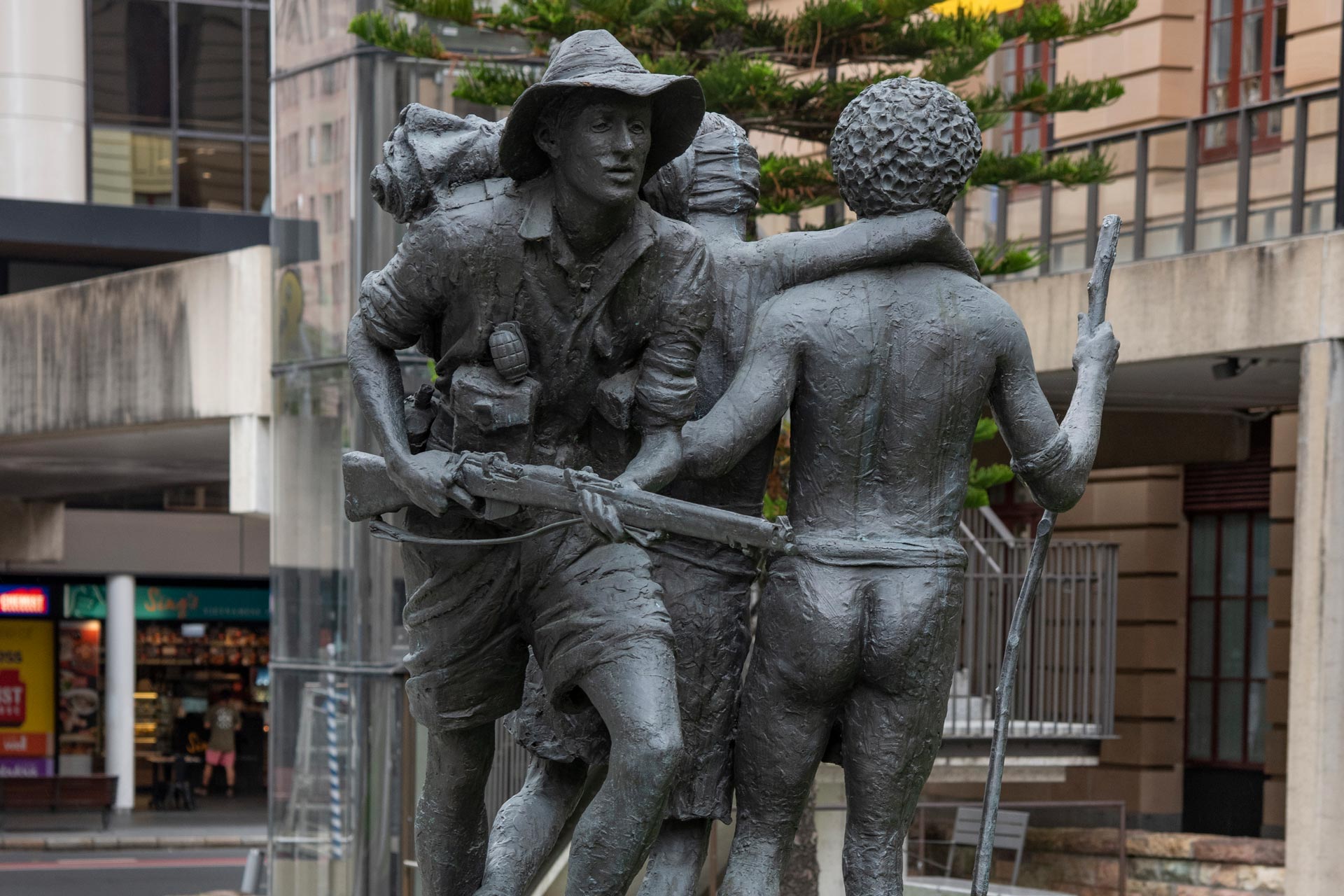 The amazing story behind a stunning new work of sculptural art and commemoration, from inception to unveiling.
Learn more

Unveiled on 24 March 1932, the Women’s Memorial is carved into the sandstone on the western wall of Anzac Square, just beside the main entry to the Memorial Galleries. This memorial is a tribute from all the women of Queensland to men and women who lost their lives through service in The Great War. The sculpture was designed and created by the renowned Brisbane sculptor Daphne Mayo, who worked on the tablet at Anzac Square through to 1932, including long hours onsite chiseling the figures into the sandstone wall.

Miss Mayo's own brother had died aged just 32, his health having suffered from his war service. He is one of the figures depicted in the tablet, leading the procession, which also features a horse-drawn wagon flanked by 23 other men and one woman from all branches of the defence forces. Since its inception, the Women’s Memorial has formed a backdrop to the many commemorative events and services held in Anzac Square, including events attended by women over many decades. 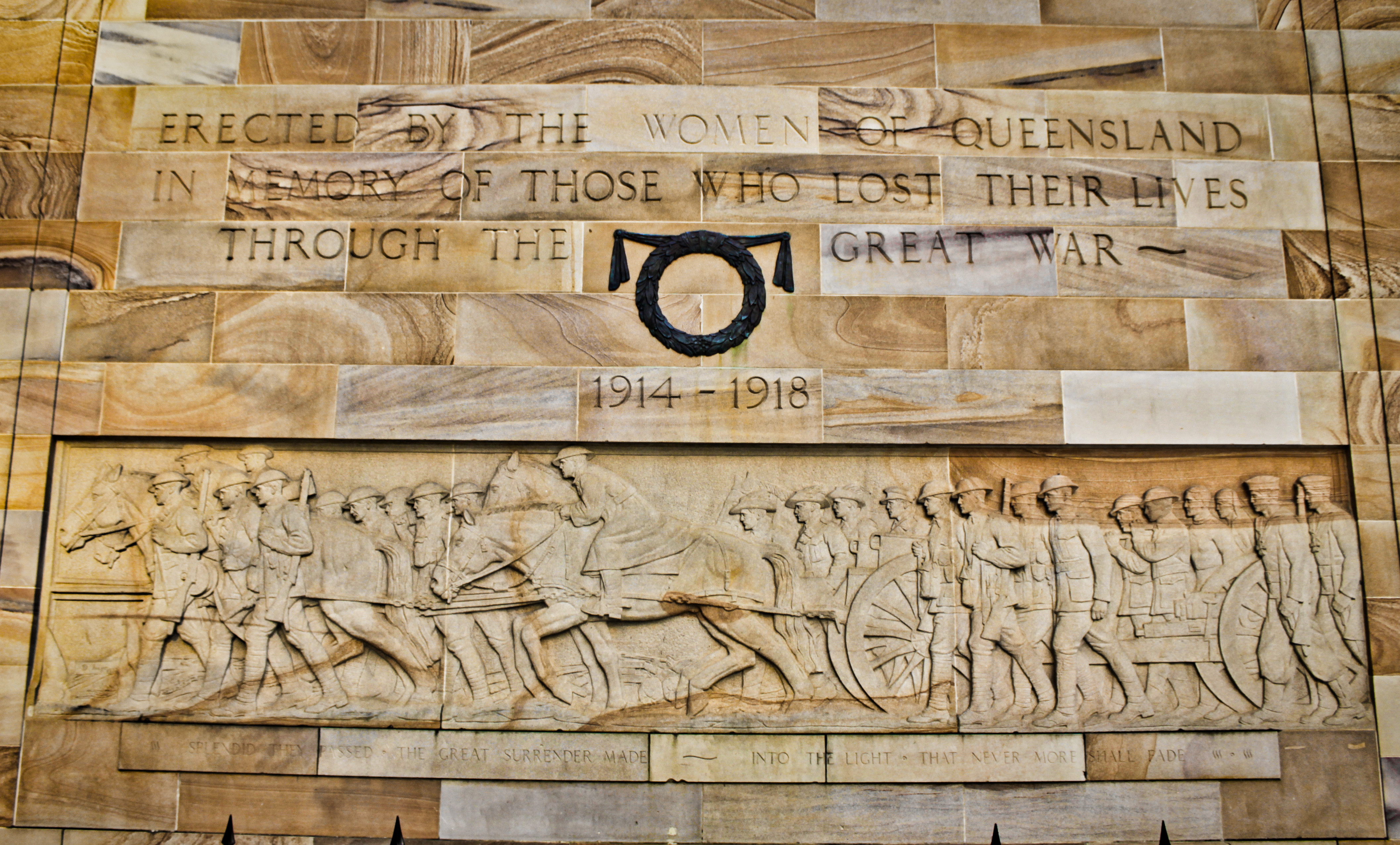 The WWII Nurses Memorial depicts a wounded Australian soldier being assisted by a nursing sister, a scene typical of all theatres of war. The courage, professionalism and compassion shown by nurses and the sacrifices they made during the war is recognised in the strength and dignity portrayed in this artwork by John Underwood of Artbusters. It exemplifies the involvement of all Australian servicewomen and men in World War II. It was unveiled on 29 August 1992 by Alderman Jim Soorley, Lord Mayor of Brisbane, during the 50th anniversary of the Milne Bay and Kokoda campaigns.

A Nurses Memorial Candlelight Vigil is held at this statue in April each year to honour the tremendous contribution of nurses who have served and continue to serve in the Australian Defence Force and to commemorate those lost in events such as the sinking of the Centaur Hospital Ship on 14 May 1943. 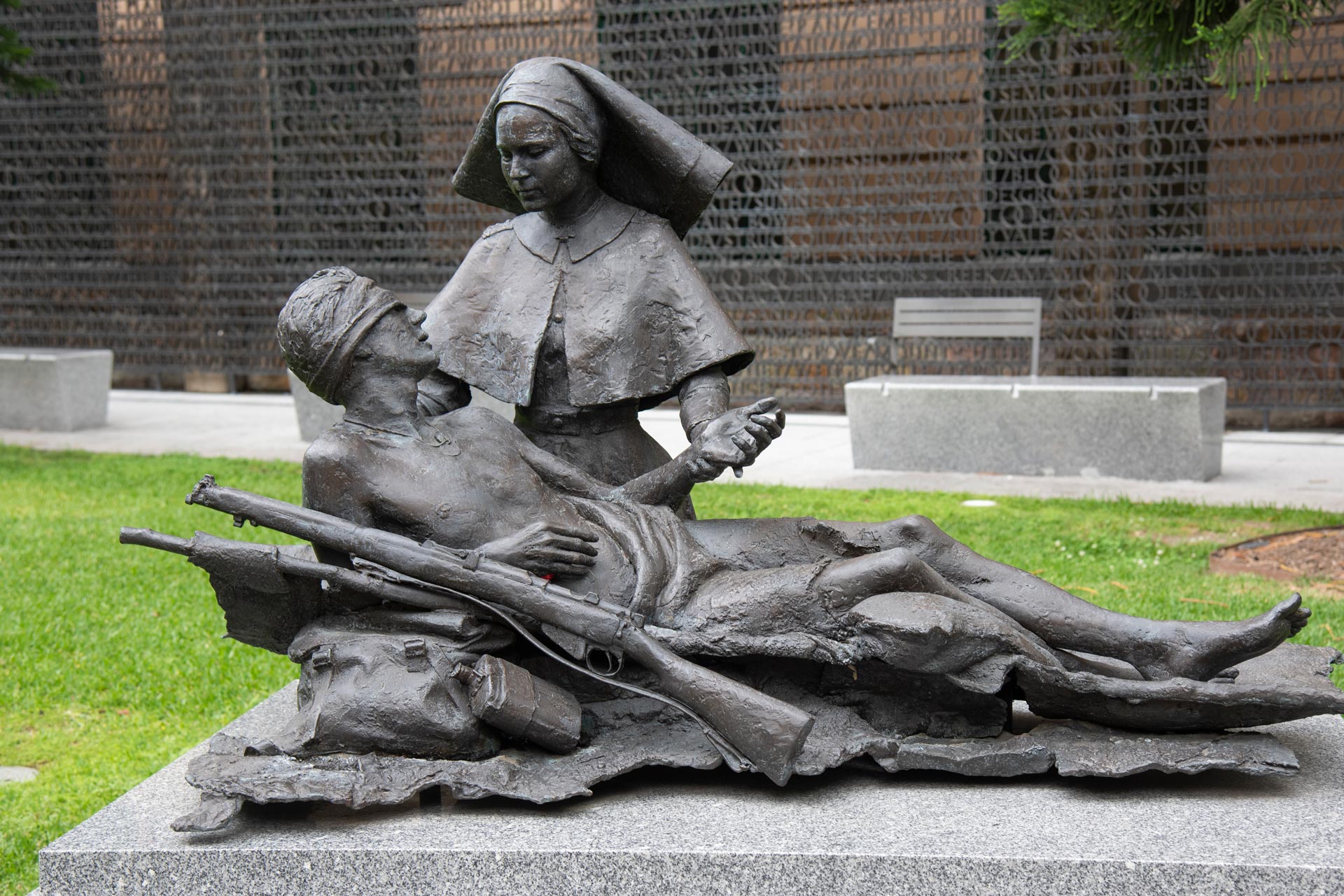 The Korea, Malaya, Borneo Memorial is dedicated to those Australians and their Allies who died or suffered as a result of their service in Korea (1950-1953), Malaya (1948-1966) and Borneo (1962-1966). It features life-size statues of soldiers in winter and summer jungle uniforms. The winter uniform signifies the struggle with the extreme weather conditions that faced the Australian troops during the Korean War, a stark contrast to the oppressive heat and humidity faced in Malaya and Borneo.

The memorial was unveiled by Sir Walter Campbell, Governor of Queensland on 23 April 1988 and was sculpted by Rhyl Hinwood. 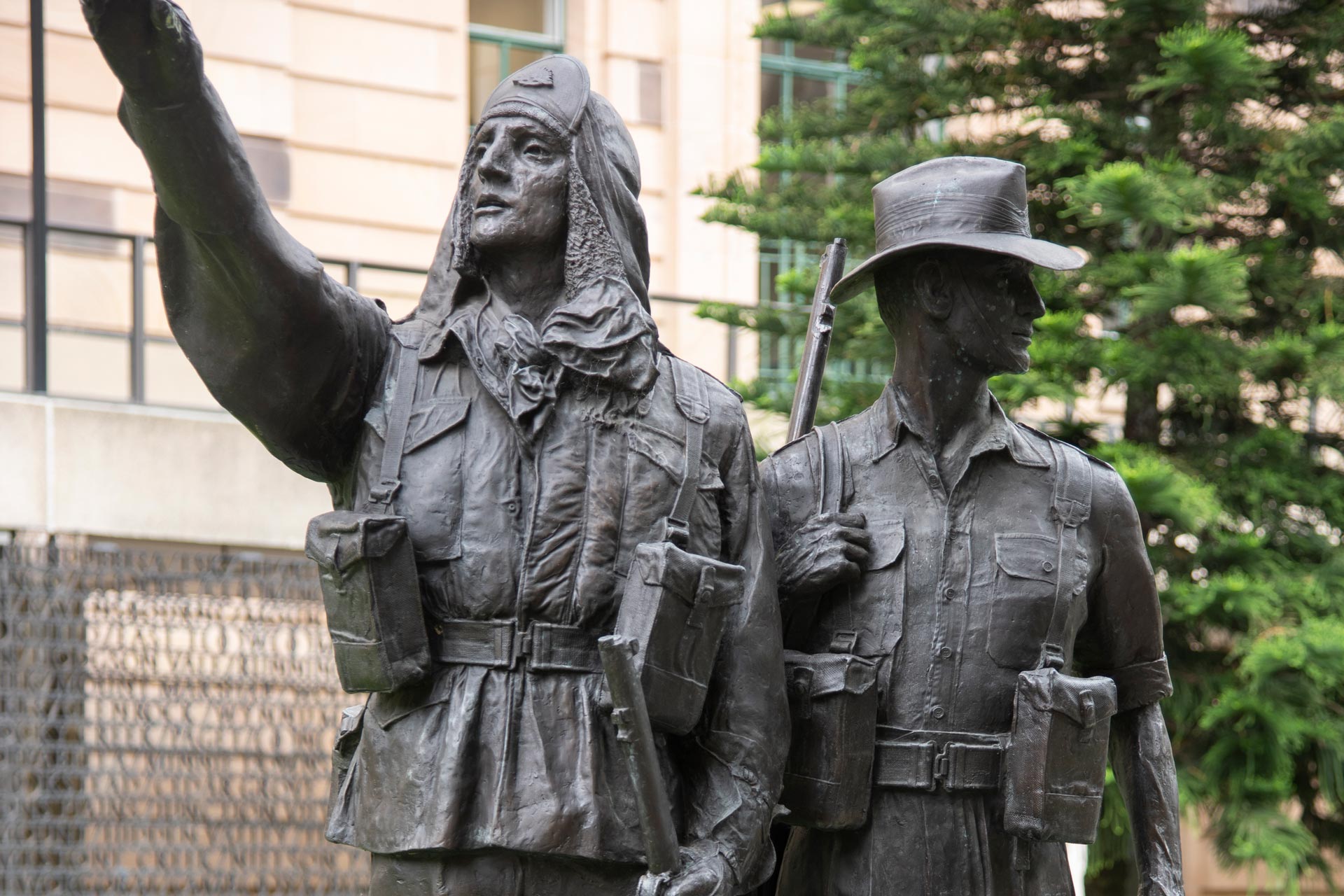 The Vietnam Memorial pays tribute to Australians and other Allies who died or suffered as a result of service in South Vietnam from 1963 - 1972. It depicts a soldier directing in a helicopter for a fellow soldier who is wounded. The life-size bronze figures are set on a black marble base with two dedication plaques.

The memorial was sculpted by Dorothea Saaghy and unveiled by the Governor of Queensland, the Hon. Sir Walter Campbell Q.C., on 23 April, 1988. This memorial is the focus of commemorations for Vietnam Veterans' Day.

The Anzac Square Peacekeepers Memorial lies in the south western side of the park. This memorial plaque sits at the base of one of the beautiful bottle trees (Brachychiton rupestris) next to the Royal Australian Navy pathway. It was dedicated on 24 October 2001 to celebrate United Nations Day and to honour the contribution made by Australian peacekeepers and peacemakers. The marble for this plaque was donated to Queensland by the people of East Timor.

The International Day of UN Peacekeepers is held on 29 May each year and a service for this annual event is held in Anzac Square, with wreaths being laid at the Peace Tree. 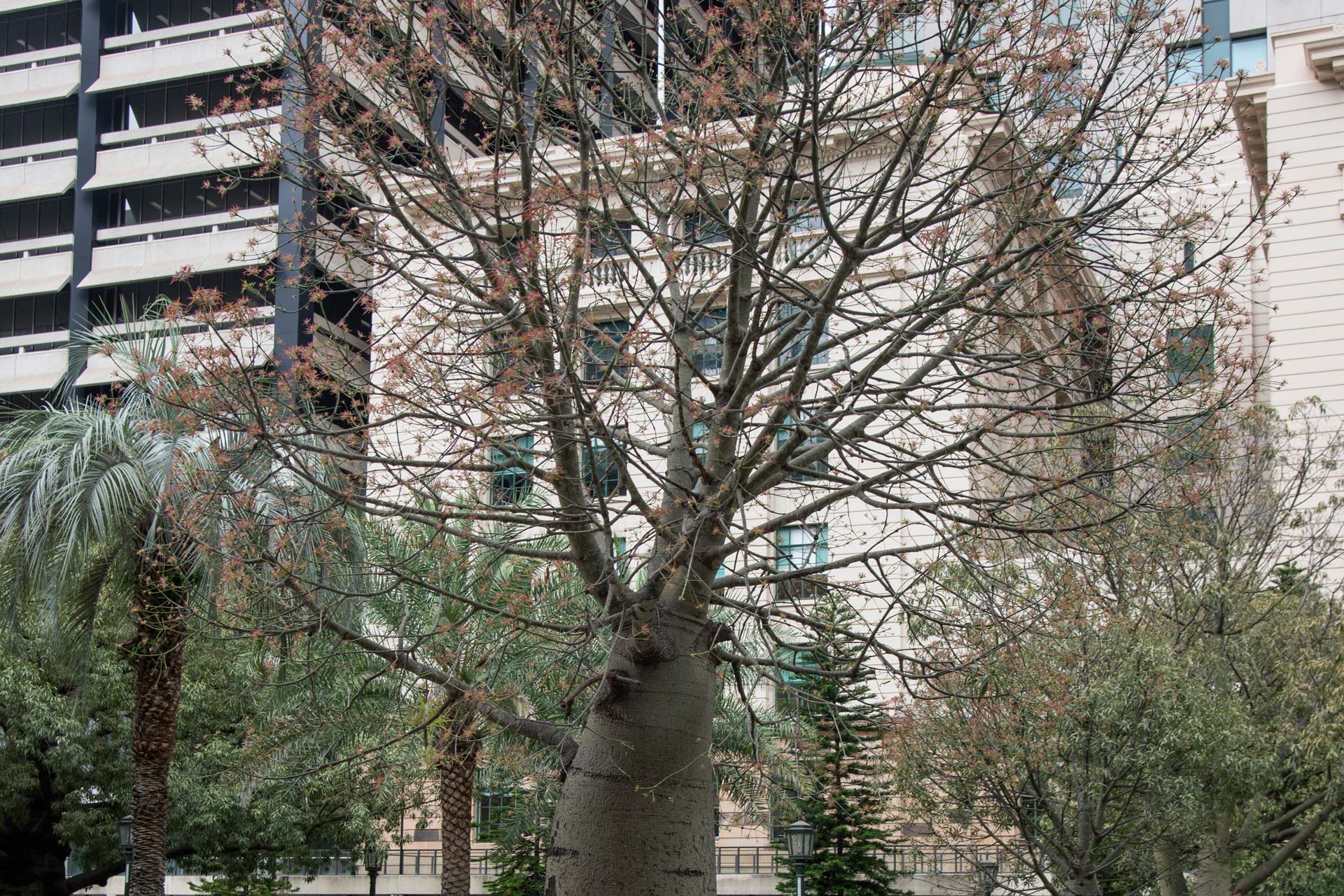